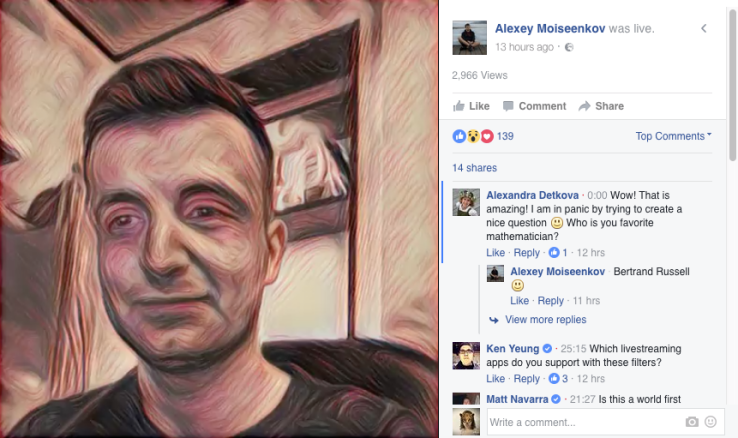 Founded in 2004, Facebook has been offering seamless connectivity to their users, connecting with new people, sharing what they have in mind and a lot more. Billions of people all around the world have registered themselves in Facebook and spend hours in social networking. All you have to do is sign up for an account and you’re good to go. It has evolved a lot and every now and then the company has added great features to their website.  One of the newly added services provided by Facebook is the ‘Live Video’ called Prisma where a user can broadcast himself live from any place using their PC or from their phones using the Facebook app.

A few things about Prisma

Founded in Prisma Labs (Russia), the application allows the users to edit their photos and transform into something that was never seen before. The filters are really cool and eye catching and users could get an artistic touch with their transformed photos. With over a million active users, Prisma is available on both android and iOS platforms.

Introduction of filters to the Live Video

Prisma recently added the feature of applying artistic filters in real-time over the Facebook Live video on its iOS application. But it didn’t last for long. Almost immediately Facebook cut off Prisma’s access to the interface. Well it must be mentioned that Facebook holds all the rights of allowing or blocking any application to access its interface. They have said that the Live Video is meant to allow users to share live videos from different sources like DSLRs, phones, gaming videos and multi-cams. Drones are flagged and streaming from such devices is prohibited. The FAQs of Facebook clearly states that the interface can be used for application of filters to the live video. Prisma filters fits well in this context but in the end, the decision taken by Facebook cannot be altered.

Why go through all this

Reports say that Facebook has plans to introduce filters to their Live Video feature on their own app across all platforms. So evidently they don’t want Prisma to take the upper hand. Prisma has gained worldwide popularity after its launch in June. It had over 75 million downloads by November and the developers have never failed to add features to the software. After the support for Live Video was turned down by Facebook, Prisma developers said that they had bigger plans for live videos. Currently they are working on something that would allow users to stream videos to various websites. During mid-December, a social-focused release is expected.

Facebook has strong policies and app developers must appropriately design their applications. Prisma with its range of filters have definitely changed the concept of editing and we all love it! Maybe Facebook was a bit too harsh this time but we cannot really complain. Hopefully Prisma comes up with something cooler which would support streaming to various websites and other applications flawlessly.