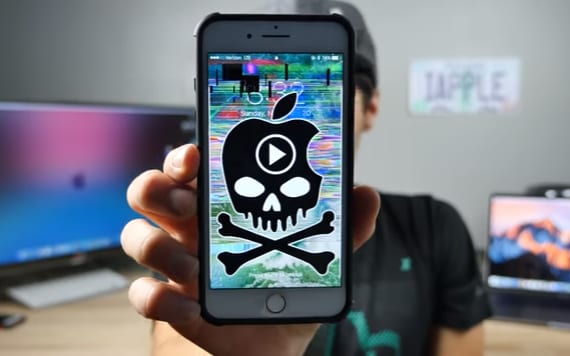 The hackers are at it again. Phone bugs are a handful at any point of time, some worse than the others. This time it’s an airborne Video Bug, which messes up your phone much to your anxiety and frustration. Once you click on the link in Safari which has the popular MP4 format, the video starts playing and by the end of it, your phone will be normal for around 2 minutes. And right about then, you’ll notice it starts slugging. Eventually, it will crash.

Everything ApplePro has discovered this Video Bug and the video bug clip has a person standing by the bed, with the word “honey” written across the screen. This iPhone freezer Video Bug is not the first of its kind but certainly mysterious about how it works. It does not have the same effect in Windows and Android platform phones. When the video remains partially watched, the effect was seen to be exactly the same.

This Video Bug reminds us of the previous date-killer bug that crashed all phones in the Western time-zones if the date was manually changed to 01.01.1970 (A date when nothing called an iPhone existed.) Apple fixed the bug in the patch released later.

Getting out of the mess

The only way you’re going to get your phone working back like normal is to make the hard reboot of the hand set. On all iPhones except the new iPhone 7, you can make the hard reset by pressing on the home and power buttons at the same time for minimum of about 10 seconds. On iPhone 7, reboot works the Android way. Pressing on the home button and volume button down together. The Apple logo appears and you may release the buttons so that it’ll begin its restart.

General tips that will help you keep your phone safe

We may not foresee the actions of Video Bug that surface up over time but there are some general precautions you should take to have an un tampered digital existence with your Smartphone. Apple usually fixes the bugs reported as soon as possible with its next update but you need to be careful not to click on malicious or suspicious links or in our case, videos. Your curiosity might literally kill your phone, though for a short time.