Twitter Now Lets You Slap Ad Stickers on Your Photos 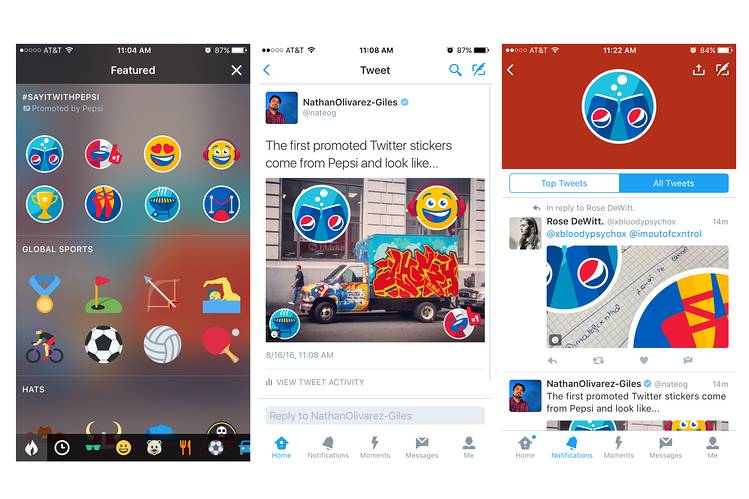 Twitter makes it more interesting for the users by introducing a new feature which lets them to slap ad stickers on their photos. This feature has many interesting plus points, one of them are it allows the users to express themselves visually which they were not able to ever before. Twitter is offering many companies to have their #Stickers for getting promoted. Mainly PepsiCo has signed with Twitter till now and all the stickers in Twitter library are the promotional emojis of PepsiCo.

These are mainly promotional stickers which are offered by several companies to Twitter. These stickers serve the same way as the hashtags do. If the users will click on the stickers then they will get to see all the other photos on which the same sticker has been used.

These stickers are a type of emojis which express different emotions and feelings. You will get approximately 50 #Stickers from PepsiCo in the sticker library of Twitter. Twitter users have been using emojis, hashtags and hearts so far to express their emotions, but now they can express themselves more from their photos by using these #Stickers.

How this is attracting the users?

These #Stickers are gaining craze among the users. This feature of Twitter has a unique function due to which it is gaining its most of the popularity. Suppose if anyone tweets a photo with a trophy sticker, then others can click on the trophy and can see all the other photos where this trophy has been used. According to Twitter, clicking on a sticker will take you to a new timeline where you can see how people all over the world are using the same sticker in various ways.

How to use #Stickers?

Using these #Stickers is just very simple. It is as simple as using hashtags and emojis for your tweets. You just need to follow four simple steps –

Also, you can use more than one sticker in a photo. The stickers also join other existing phot-editting tools of Twitter which includes tags, cropping, filters, etc.

With these #Stickers, Twitter is helping big brands like PepsiCo to campaign for them. PepsiCo is the first brand to launch a paid ad campaign with Twitter by using visuals, i.e., custom-branded stickers. These stickers are a part of their on-going campaign #PepsiMoji. When users click on the stickers after uploading their photos, at least eight of the #Stickers are promoted at the top of the page. Like this, PepsiCo is getting promoted and engaged among their fans.

Several other brands are also offered by Twitter to join the paid ad campaign for their promotions. Basically, Twitter is giving a platform to all the big brands to promote them using visuals. On the other hand, Twitter is also letting its users to get more expressive while tweeting anything on their timeline.

Hence, slap ad the #Stickers on your photos and get more creative while tweeting!