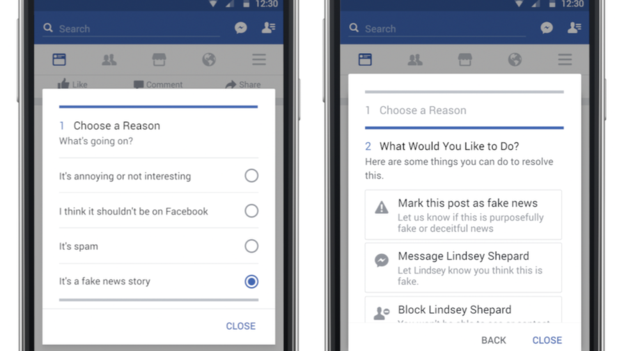 Facebook is the most widely used social media platform in the world at the moment with more than billion members. Over the years the trend of viral news and content has developed at an alarming pace which has resulted in creation of fake news which amounts to misinformation and misuse of the platform.

In a bid to secure its social media platform and to ensure that no one could propagate wrong information and content in order to get viral or cause confusion among the users. Facebook has come up with a number of new features which will allow it to curb the rise of fabricated fake news stories from all across the globe in a dignified manner.

News reporting feature is the need of hour

The roll out of news reporting feature is completed along with a number of other changes to combat the misinformation through fake news effectively. The reason for releasing these features is directly influenced by the backlash it received during US presidential election campaign.

This news reporting feature comes loaded with the ability to flag fake stories. Fake stories are simply the one which is fabricated by users or spammers to create viral content which doesn’t do any justice to the users in any way. Fake news trending on the internet sometime results in embarrassment for the person or firm and even creates unwanted confusion among others. Facebook will be bringing certain definite changes in the algorithm to ensure that fake news is rooted out of the platform.

Facebook gearing up to get rid of fake news

Facebook announcement has made it clear that its platform is designed to offer people a voice but it shouldn’t be utilized for abating the truth in any manner. Facebook has simply added a new option in the platform for “it’s a fake news story” in the reporting feature. This will allow users to report spam or annoying content which will later on subdued by the Facebook on its platform to upkeep the user experience.

Secondly a new label of ‘disputed’ stories is also introduced which will simply refer to third-part fact-checking. The fact-checking organization has to be sign up for a code of principles to act upon while checking upon the disputed stories present on the platform.

Facebook currently has just 43 signatories with it which mainly includes news organization to take upon the task of checking the disputed content from all across the globe. Once checking is performed by the organization then it will be labeled with a link stating the reason or it will simply lower in the social feed.

Thirdly, disputed story feature will also warn users about possibility of sharing such content. Facebook will roll out more new features to enhance its ability to check upon the fake new in more effective manner. It is also looking at the option of penalizing the websites who indulge in mimicking major publishers or mislead the readers by pretending to be news from reliable sources.