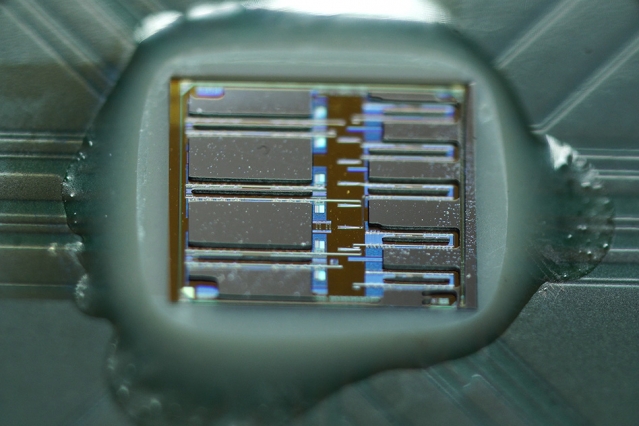 What are optoelectronic chips?

To understand what optoelectronic chips are, we first need to know that an integrated circuit (IC) also known as a chip is a combination of electronic circuits on a small flat strip or chip made of silicon which is the semiconductor.

In an optoelectronic chip, electronic circuits and optical devices are integrated on a silicon chip. The light signals are converted to electricity. However, when there is contact with a metal there is an interference with optical data transmission. The researchers have put the metal on the inner ring of a donut-shaped optical part called a ring resonator. The metal will not interact with the light that is travelling around the outer ring of the resonator. When electricity passes the optical properties of the resonator will be modified or there will be changes in the light signal that carries data, thus allowing to and fro transmission between optical and electrical signals.

In the optoelectronic chips, it was shown that light detectors that were built from the ring resonators are very sensitive and hence bring down the energy cost of transmitting a bit of information to one-tenth of the requirement of electronic chips.

What is the purpose of optoelectronic chips?

In optoelectronic chips, an optical wire can send multiple data signals on different wavelengths of light. On the other hand, copper wires send only one signal per wire. Hence the optical chips can transmit more information and use less space. In addition there is less amount of heat wasted.

Currently, in big data centers there is a bandwidth bottleneck. Based on different functions like logic and memory, the computer chips send data between the chips. The traditional chips take a long time to send and receive data causing bottlenecks. In the process a lot of power is being wasted.

The optoelectronic chips can bring about a reduction in energy usage by 95 percent in chip-to chip transmissions. There will also be a tremendous increase in bandwidth as compared with the copper-based chips.

In the field of telecommunications, optical devices are made separately and then attached to silicon chips. This may not work with the traditional microprocessors since a higher concentration of components with high performance will be needed.

It would be better to add optics to the microprocessor’s electronics and build both of them directly on the same chip of silicon which is referred to as monolithic integration.

Large chips can be used in the telecommunications systems but not ideal in laptops or cellphones.

Many researchers are trying to develop techniques to monolithically integrate optical components into the computer chips. They have developed chips which are controlled by on-chip circuitry. However in one of the production stages of etching a channel under the waveguides, they are not able to prevent light from leaking out. Hence there needs to be some modifications in the manufacturing processes.

There has been a lot of research in this field conducted by MIT. The startup, Ayar has developed optoelectronic chips with a unique design that blends the speedy and efficient optical transmissions (parts that transmit data with the help of light waves) into the traditional computer chips. This will replace the copper wires that are less efficient.

Researchers at MIT, The University of California and University of Colorado have developed a working optoelectronic chip which computes electronically and uses light for data transmission. They used the same process that was present in the already existing microchip fabrication facilities.

Optoelectronic chips could reduce power consumption to a great extent and also maintain a steady increase in computing power.