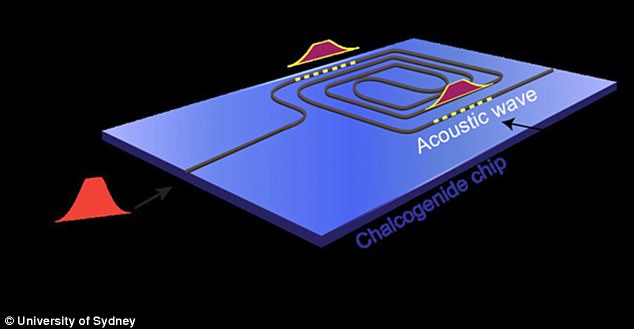 For the first time, scientists have stored light as sound which could lead to a major breakthrough in the field of super-computers using Microchips.

By transferring the data, scientists have been able to slow down digital information. This they could achieve by transferring light-based data into sound waves on a microchips.

Big companies like IBM and Intel have pursued in their research by storing light as sound for years, but to no avail. Researchers hope that  their breakthrough could lead to super-fast computers, where data travels at the speed of light.

. A microchips from chalcogenide glass have been created by scientists.

. The microchips converts light to sound for a short while, before converting it back to light.

.The drawback of light is its speed, though it is a good carrier of data.

. Thus, sound which acts as an ‘acoustic buffer’, can become helpful by slowing down light.

The Working of the Microchips

It is made up of chalcogenide glass, which provides optimal guidance to light and sound waves.

The salient features of the microchips  is that it operates at room temperature, it can be used with other computer components and hence easily integrated into photonic circuits.

Though light is a good carrier of data, its speed can become a hindrance to the computer. To surpass this difficulty, the researchers have created a microchips , whereby light is temporarily converted into sound.

Based on this technological breakthrough by the researchers from the University of Sydney, this article was published in ‘Nature Communications’.

These chalcogenic microchips  use the information from light to manage data. The development of photonic circuits is based on these microchips that briefly transfer data from light to sound and then back to light.

What are its uses

From telecommunications to optical fibre networks  and cloud computing data centres, these microchips are in the process of being developed. These will be useful since the traditional electronic devices are easily susceptible to electromagnetic interference, produce too much heat or use too much heat.

Dr. Birgit Stiller, supervisor of the project, said that the information in the Microchips in  acoustic form travels at a velocity  five orders of magnitude slower than in the optical domain.

Mr. Moritz Merklein, lead author of the study, said that an acoustic buffer has to be built into the Microchips  to control information by several orders of magnitude.

Dr Steve Madden,one of the researchers, said that information that is transferred from the photons of light to sound is  receiving  a lot of attention all over. They are hoping that it will encourage others to work on it and come up with some new on-chip information processing capabilities.

While light-based data has its advantage, it needs to be slowed down to allow one to do something useful with it. This can be achieved by using electronics, but as the computers and telecommunication systems are becoming bigger and faster, the associated heat is making the systems unmanageable.

Using photonic Microchips could be a solution to the problem. It is being researched and pursued by large companies like IBM and Intel.

For this to become a reality, microchips come to the rescue. They need to slow down the light-based data, so that it can be processed, routed, stored and accessed.