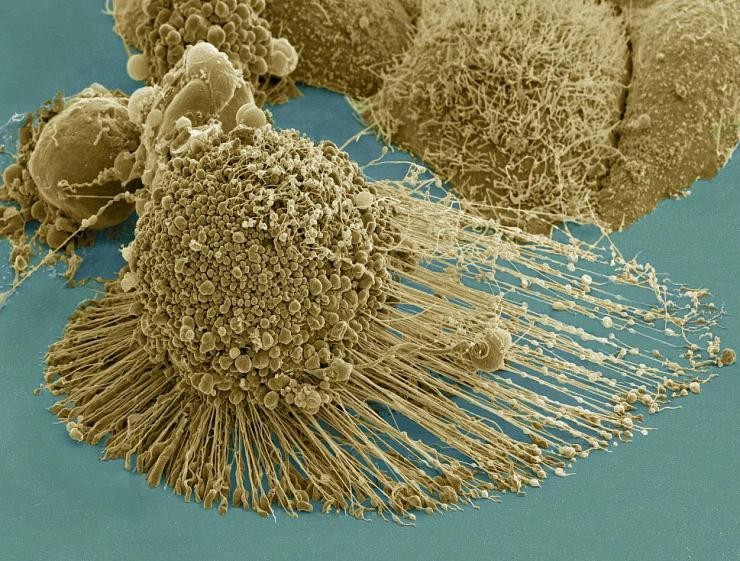 Very often, Cancer cells prove to be fatal by relocating themselves away from their original tumors to later on take root in other critical parts of the body. This process is called Metastasis. At present a research team guided by the Georgia Institute of Technology has developed a new treatment prevent the spread of cancer to other parts of the body by, metaphorically speaking, breaking the legs of the cancer cells by Metastasis.

Cancer cells frequently envelop themselves with coarse leg-like protuberances that allows them to move stealthily. According to a new study, the researchers have used minute gold rods that are gently heated by a laser to contort the protrusions. In experiments conducted in common laboratory cultures of human cells that were cancerous, it was observed that this treatment disallowed cell migration, which is a key system in Metastasis .

Potentially, this method could provide as a weapon for clinicians that pursue individual tumors to fight cancer’s fatal spread. At present, the medical field is far less than well-resourced to prevent Metastasis . Lead researcher Mostafa El-Sayed, Julius Brown Chair and Regents Professor at Georgia Tech’s School of Chemistry and Biochemistry said that as long as cancer remains in a tumor at one particular place, it’s easy to get to and it’s unlikely to be fatal to the patient, but when it extends to other parts of the body, it proves to be deadly.

In addition, this treatment kills cancer cells with ease, but in this experiment, it was important to particularly show that significantly slowed cell migration, thus slowing the process of Metastasis. However, this technique is not listed for human testing.

This experimental treatment did not harm healthy cells, making this method, in all likelihood, much less straining for the patients as compared to chemotherapy, which is more commonly used. In tests conducted in animal models in the past, the researchers found no harmful side effects as a result of the gold used in the treatment and no apparent harm to healthy tissue caused by the low-energy laser. Also, the reappearance of the treated cancer was not seen.

El-Sayed stated that the technique seems to be very successful as a locally administered treatment that also defends the body from the cancerous spread originating from the tumor. It is also very mild on the patients, so it can be administered multiple times if required.

How the cancer’s cell’s legs works

In order to understand how the treatment works, one needs to take a closer look at a cell and what happens to it in case of a malignant cancer. It is a common notion that cells are water-filled balloons which are nothing but fluid contained in a membrane sheath with minute cellular organs floating inside. However, this is not the complete picture. Cells have grids that are there for support and are called cytoskeletons that help them stay in form and have various functions.

These cytoskeletons also form stubbly protrusions called filopodia, which expand outward from a mesh of fibers called lamellipodia that are located on the cell’s fringes. The protrusions usually help healthy cells relocate in the tissue that they constitute.

But in the case of malignant cancer, normally healthy cell processes frequently dive into a destructive mode. Lamellipodia and filopodia are uncontrollably overproduced. Yue Wu, a graduate student in bioanalytical chemistry, stated that all these lamellipodia and filopodia function as legs for the cancer cells, which is required for Metastasis for the cells to travel.

How the rods work

The gold nanorods are made up of a small group of gold atoms, where nano is in reference to being billionths of feet or meters in size. These nanorods help stop the protrusions in two ways.

In the first method, El-Sayed’s nanorods are included locally, where they obstruct the leggy protrusions of the cancerous cells. Coated with moleculs (RGD-peptides), the rods help restrict them particularly to a kind of cell protein called integrin. Yan Tang, a postdoctoral assistant in computational biology, who contributed to the study, said that the nanorods bound up the integrin and jammed its functions, so that it was not able to guide the cytoskeleton to overproduce lamellipodia and filopodia. The binding of the integrin itself alone hindered the migration of malignant cells, thereby hampering Metastasis.

But the healthy cells were under no threat absolutely. One of the study’s first authors, Moustafa Ali, said that there are some, particular integrins that are overproduced in cancerous cells and they are not found that much in healthy cells.

In the second method, researchers subjected the gold nanoparticles with a laser having low-energy, of near-infrared light (NIR). It put a significant and noticeable stop to the migration of the cancer cells, thus preventing Metastasis. Ali said that the cells did not absorb any light but it was absorbed by the gold nanorods, due to which they heated up and partly melted the cancer cells they are associated with, contorting lamellipodia and filopodia. In this experiment, it did not kill all the cells. If all the cells were killed, then it would have not been possible to examine whether their migration was prevented or not. If required, the treatment can also be modified to kill the cells.

Another researcher, Ronghu Wu, said that this gentle laser did not cause the skin to burn or did not damage the tissue, so it could be administered many times and stop Metastasis of the cancer cells.

Possibilities in the Medical Field

The researchers at present look at using this technique for treating cancer of the head, neck, breast and skin areas with local, direct nanorod injections in addition with the near-infrared laser that’s low-power, which can fire the gold nanorods about 2-3 centimeters, approximately about an inch, deep in the tissue to check Metastasis. However, Ali said it could also go deeper to about 4-5 centimeters. Tumors that are deeper can possibly be treated with even more penetrating injections of nanorods. Administering it through the bloodstream as a broad treatment would not be a practical option as of now.

Mostafa El-Sayed is one of the world’s most notable living chemists, whose achievements have paved the way for many new avenues in nanoscience and technology to breack Metastasis. The President’s National Medal of Science, granted by President George W. Bush, and the President’s National Medal of Science Committee given by President Barack H. Obama are counted among his many recognitions.