Apple seems to revolutionize consumer technology at least once per decade. The iPad Pro could be this decade’s biggest advancement. That’s practically sacrilege for those who worship at the Alter of Steve Jobs, but it’s true. This is a seriously innovative product that makes other tablets look like toys.

If you’re accustomed to using a basic tablet, you’ll want to learn these four ways to rock your new iPad Pro. They could change the way you use your new device.

The iPad Pro comes with an A9X processor that has 12 graphic cores. In other words, it can process images at blazing speeds that rival most laptops. When you combine those fast speeds with the iPad Pro’s Retina Display, you get a tablet that’s perfect for watching HD movies.

You even get perfect picture quality no matter where you go. The iPad Pro has four-channel ambient light sensors that measure the amount of light in your environment. If the light gets brighter or darker, the screen adjusts automatically.

The iPad Pro also has four high-fidelity speakers that will immerse you in your favorite movies and television shows. It’s obviously not as good as going to the movie theater, but it replicates the experience surprisingly well when you make a bowl of popcorn and turn off the lights.

You can play plenty of fun games on a regular iPad. Most of them, however, have simplistic graphics. That’s OK as long as the game developers focus on the story, but sometimes you end up with a great idea that gets watered down before it reaches the App Store.

Developers have already released several stunning games that rely on the iPad Pro’s fast processor and Retina Display. Titles like “Year Walk,” “Tengami,” and “Fallout Shelter” look better than ever. As more companies realize how much power the iPad Pro has, they will likely release more games that take advantage of its unique features. Even the games designed for older iPads, however, look and feel better on the updated device.

If you’re a serious gamer, this is the only tablet you should ever think about buying. 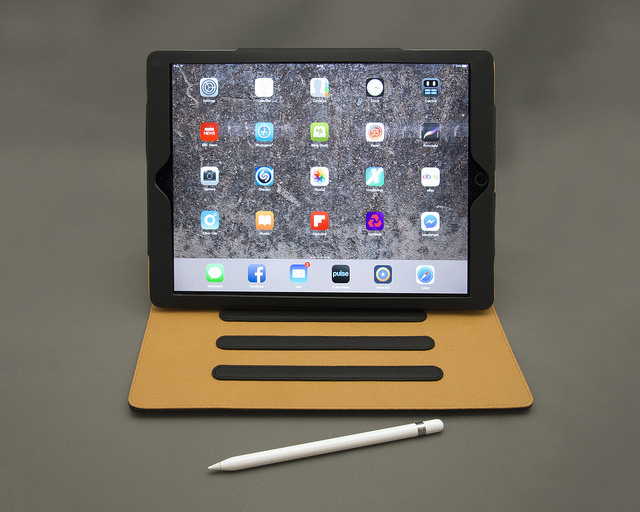 The Apple Pencil also adds to your creative endeavors. Don’t assume that only illustrators can benefit from the Apple Pencil. The stylus can control numerous apps, including those used to make music and edit photographs. It comes in handy when you’re deleting some notes in GarageBand or cropping pictures in Photo Editor.

Write a Novel (or at Least a Short Story)

Tablets are great for reading, but they’ve never been very good for writers. The idea of typing more than 140 characters on a screen-based keyboard makes you appreciate Twitter’s platform. With the iPad Pro, though, writers can work on their masterpieces no matter where they go.

The larger screen makes it a lot easier to type on the iPad Pro, even if you are the kind of writer who still uses the hunt-and-peck method. More importantly, Apple designed the onscreen keyboard to work like a standard keyboard, so you get a dedicated number row that doesn’t accidentally insert digits into your short story.

The iPad Pro is indisputably the most sophisticated tablet available to consumers. If you already own one, make sure you get the most out of it. If you’re currently shopping for a new device, these four reasons should convince you that the iPad Pro is the only tablet worth owning.