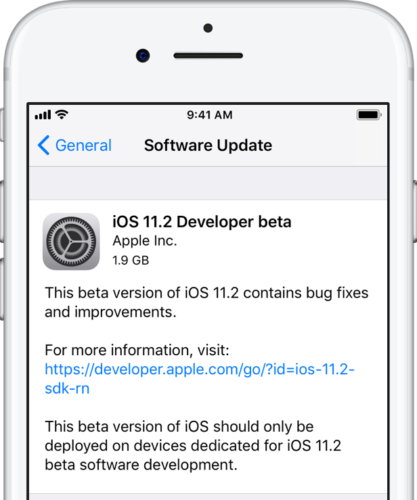 Apple has released iOS 11.1 to the public. The new version of iOS include a variety of bug fixes, feature enhancement, security importance and other additions to the mobile operating system making iOS 11.1 a recommended update for iPhone and iPad users running prior version of iOS 11.

IOS 11 brings a host of new features and changes including a new file system with the files app, a redesigned control center, drag and drop, AR Kit, Apple Pay in Messages, a redesigned app store, improved Siri. It has also introduced subtle design changes to interface elements thought out the operating system. Text is bolder, apps like calculator have a new look and the lock screen and control center have been entirely redesigned and more.

There are quite a few small tweaks and enhancements scattered through out the release, but 11.2 betas 1 also lends us a first look at the new Airplay 2 Multi-room control features.

Here’s everything that’s new in this update:

ApplePay Cash is not activated in the current IOS 11.2beta, but the 2GB update could well be laying the groundwork. Developers have also uncovered a screen shot of Apple Pay cash running on an iPhone X in the latest beta.

Airplay 2 Support: if you’ve got an apple TV running on the latest software, you can now test Airplay functionality. Airplay 2 features let you control the audio output of multiple connected devices from your iPhone. It’s actually pretty handy to be able to go in and view what each is playing and tapping on weather lets you jump between the controls. You can easily view multiple sources in theNow Playing Widget.

In Now Playing section, you’ll now find squared album art instead of one with rounded edges. This will allow viewings the complete album art. There are options to include a wider range of settings.3 d Touch integration has expanded so you can do more without needing to open the settings app. Apple has also spilt the Control center accessed by swiping upwards from the bottom of the display into multiple windows. It’s iOS 11 its back to single consolidated window and it has entirely new look with bubble style icons. There are two top sections for basic networking option and apple Music controls, plus sliders for volume and brightness. Smaller icons are available for rotation lock, Do Not Disturb and other option.

In the setting app there’s a section for choosing which feature you want to be able to access in the control center, there are quite a few option available. Low power mode can be added to the control enter.

Apple has tweaked some emoji icons (like the camera and the Whiskey glass) and the arrangement of the emoji has also changed a bit.

There were several bugs fixed including a flicking boot logo and the infamous calculator bug.The calculator latency bug where you couldn’t tally up 1+2+3 is gone. Now 1+2+3 will again equal to 6.

You’ll find the new iPhone 8 exclusive wallpaper on older devices like the iPhone 7.

Now when you click the side Button on the iPhone 8 it will no longer lock your devices like it used to. This change makes the latest iPhone consistent with the iPhone X.

The photos app has a new animation when you swipe up to view Photos.

Small tweaks include Siri Kit for Home Pod being added, allowing developers to optimize their apps for Home Pod support thinner load bar on boot up, and other under the hood changes. Siri has been updated with more realistic male and female voices that are designed to more closely mimic natural human speech. Siri is using on device learning to understand more about you preference allowing the personal assistant to learn more about out interest to better anticipate what you need next. Siri is also synchronising information of iOS and mac devices,so the Siri experience is the same regardless of what product you’re using. Siri does many things like suggestion of a topic; translate English to Chinese, French, German and various languages.Siri is able to learn your music taste. Siri kit was previously limited to ride scheduling, banking messaging photo search, VoIP calling and car control,but it has expanded to encompass billpaying, task management and QR codes in iOS 11.

Lock screen and the Notification center have been merged into one entity in iOS 11.

So if you’re on the Apple Public Beta program, you know what to do. The latest beta is around 2 GB.Make sure you’ve got a reliable Wi-Fi network and a full battery to download this version.