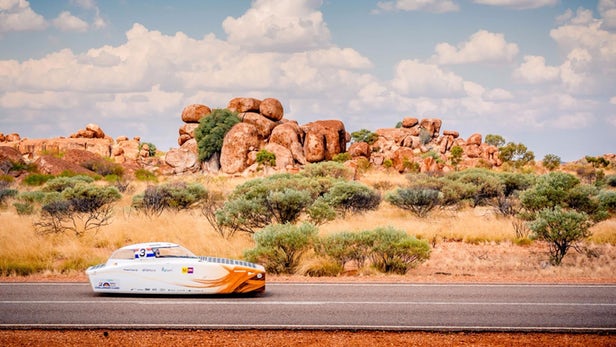 The Nuon Solar Team was very quickly out of the danger zone on the very first day itself of the World Solar Challenge and with the completion of day two, it has no intention of lagging behind or slowing down. The Dutch solar racing force again took their positions as the forerunners compared to its competitors, though there is a difference of just 24 minutes at the top three after racing for 1,300 km (800 mi) of racing.

Currently in its 30th year, the Challenger Class of the World Solar Challenge is a race of patience, survival and stamina, intended to test the limits and explore beyond these horizons in terms of solar and electric vehicle technologies by making the teams race for 3,000 km or 1,864 mi across the Australian Outback in their own purpose built cars.

On day two, battling tough weather conditions like about 36° C (97° F) of temperature, the defending champions Nuon were in the lead for eight minutes compared to their Japanese rivals named Team Tokai. As compared to Team Tokai’s vehicle, Nuon’s car has a quite different design, where, the Tokai Challenger shows a sleeker and smooth shape than the slightly boxy form of Nuna9. However, while heading into the day three of the race, Nuna9 stayed in the lead position with just 3 minutes time difference.

The Western Sydney Solar Team from Australia came in at the third place on the first day but have now further lagged behind to the seventh place. Their podium position has now been taken over by Holland’s Solar Team Twente, which is 24 minutes behind their neighbouring  Dutch team along with a time penalty still around the corner. Both the Dutch teams, coincidentally, had locked horns during the last World Solar Challenge, with just a time difference of 10 minutes between them when they crossed the finish line in Adelaide.

Overall, the competition in this year’s World Solar Challenge is pretty close, with the Solar Team Twente, currently in the fourth place, followed very closely by the US solar champions Team Michigan with just a difference of six minutes. This cut-throat competition, clubbed with stormy weather forecast are about to make things very exciting, as the weather will be an important deciding factor while the teams now step into the third day of solar-powered endurance racing.

In the meantime, in the Cruiser Class of this year’s World Solar Challenge where the competing teams receive points for factors such management of energy and payloads, Team Eindhoven hailing from Holland, consisting of a five member group, have jump started straight to the lead position with an admirable competence score of 80, while the UNSW Solar Racing Team Sunswift from Australia is next in line after them with a score of 40.6.

The leading teams of the Cruiser Class are likely to cross the finish line, which is in Adelaide, on Friday at the local time. On the other hand, Challenger Class racers are likely to make their arrival in the same town on Thurday. The progress of the World Solar Challenge is closely followed throughout the week and the time-to-time updates are available online.