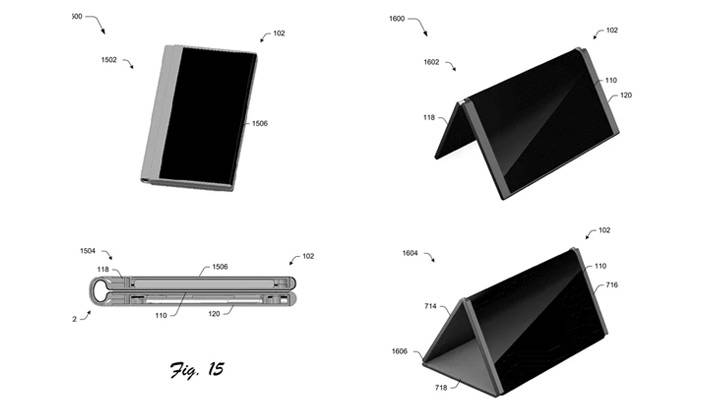 Microsoft is reeling from of making a turnaround with its Smartphone division and mobile OS. Both are going through the freefall at the moment as its percentage in the Windows OS adoption and mobile sales has diminished from being at third in the position to be nowhere.

The plight of the Microsoft which had great aims of making it big with acquisition of the Nokia mobile division were done away by its inability to manufacture quality handsets and back it up with app rich OS platform.

Now it seems Microsoft is back at work to turn truly innovative and bring something which catches the fancy of the consumers. Few leaked patents have suggested that Microsoft is secretly working on the world’s first foldable Smartphone.

The leaked patent gives a clear outline for the devices to turn from two to three screens by simply laying it out. In short Microsoft upcoming Smartphone can turn into a tablet with foldable design language.

This would be first convertible Windows device with the capability to run full version of its Windows 10 OS without any sweat. It is widely suggested that the second dynamic screen in the screen can even play the role of full functioning touch keyboard or can bring a slew shortcuts to launch multiple apps on the go. With multiple screens the possibilities for this device would be endless and unimaginable.

Microsoft has filed for these patents a long time ago in 2014. And the person who is listed as the inventor of this particular device has been named as Kabir Siddique. This guy is also behind the innovation and development of Microsoft’s Surface Kickstand along with the Surface camera angle.

The sudden burst of innovativeness

A major question which is confusing everyone is why all of a sudden Microsoft is turning innovative. Microsoft should have done these in last two years which would have saved its Smartphone line as well as adoption rate of its OS.

It can be said that Microsoft was banking on the popularity of the Nokia brand to lift off its Lumia range right of the shelves while it concentrated on developing the Windows 10 OS which works like a charm across the devices. However Microsoft is finally learning from its mistakes by moving away from the traditional Smartphone look and bringing the foldable design in the play.

Microsoft isn’t the first to develop a foldable device, Lenovo edges past Microsoft with its Yogabook which can be transformed from a single form factor to another. Microsoft has filed these patents under MS Power user wherein it elaborated how the design is going a play a vital role in enhancing the users experience on the Surface Smartphone.

Over the years we had come to understand that everything shown in the patents doesn’t plays out in the manufactured device rather remains a concept not utilized. We have to wait for the release of the much awaited SurfacePhone by Microsoft to get the final look of the design.