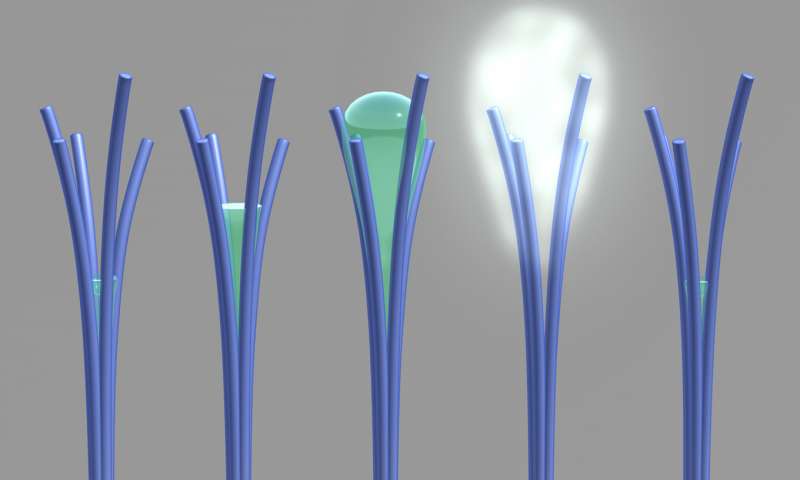 Research and development wing of any industrial sector or educational institution is regarded as a birthplace for the inventions. It will come as a surprise that a number of popular inventions have been attributed to the accidental discoveries. In short in those particular cases researchers have went to invent a particular thing but ended up discovering something else entirely. Two of the famous examples of accidental discoveries are pacemaker and super glue. In the similar fashion a great accidental discovery has been carried out by the scientists at the Pacific Northwest National Laboratory. They were trying different means to create magnetic nanowires but they ended up in creating carbon nanorods.

Rather than getting disheartened by their accidental discovery they were quite surprised to find that these nanorods have the ability to hold, harvest as well as evaporate liquid water from their fibres. Carbon nanorods discovered by the scientists offers interesting capabilities after an in-depth study which even offers cost effective solutions for developing water purification systems.

Nanorods can be used to work as stillsuits

The two scientists behind the discovery of carbon nanorods are Satish Nune and David Lao. They had published their finding in the journal Nature Nanotechnology and presented it as an exceptional water conversation substance. These carbon nanorods have a unique property which gives them ability to store as well as release water which is completely dependent on the humidity levels. His new material is expected to revolutionalize the water purification and preservation techniques to a great extent. Carbon nanorods can even be used as the stillsuits which was first shown in the movie and novel by the same name Dune.

Nanorods have been an element of fiction before discovery

The strange behaviour shown by the carbon nanorod was predicted about twenty years ago in the science fiction. However till today we didn’t had any man made materials which can offer the functionality of storing water and purification at the same time. Humidity plays a vital role in the working of the carbon nanorods. A simple example will help in understanding the role played by the humidity. A 1.5 nanometre long nanorod will only be able to absorb water from its surroundings when humidity remains in the range of 50 to 80 percent. As the weight of absorbed water increases in the nanorod it will release that store water through a burst of spray.

Currently researchers are working towards understanding the nanorods in a better fashion. Their aim is to come with more efficient forms of the molecules for better storage and purification of the water at lower costs. The present form of carbon nanorod can only release about 20 percent of water absorbed from the atmosphere. Researchers goal has been towards make use of the carbon nanorod to relieve the prevalent water shortages on the planet. The current version of nanorod is good enough to be used in the clothing and they can help in absorbing the bodily seat and turn them into drinking water.