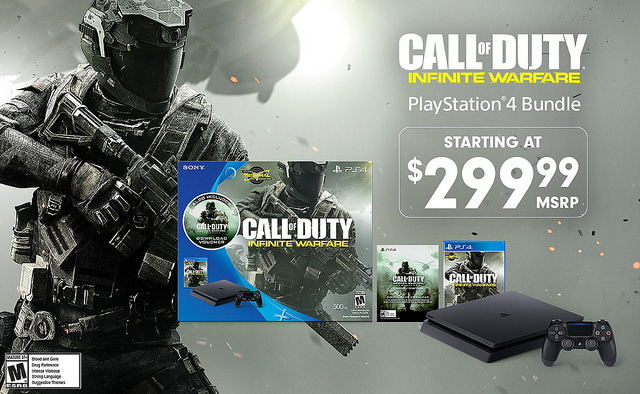 Great news for all the gaming fanatics, Sony will launch the New Slim PS4 bundle. What’s even more exciting? It will feature the latest Call of Duty game. With the stupendous success of Call of Duty: Black Ops III in the previous year there is an air of expectancy in the gaming community for what is about to be released. It is hoped that the New Slim Ps4 will deliver a heightened experience that will delight gamers all across the world. The news was confirmed by Play Station Vice President, John Koller that will launch a 500 GB PS4 model with controller.

What makes this an exciting offer is the fact that the Slim PS4 package gives users a wonderful experience of the Infinite Warfare battles. Further, the Call of Duty experience gives players a close look into Modern Warfare Re-mastered, which has been highly acclaimed. This bundle offers a lot of unique features one of which is the Terminal Bonus map. For players of the Modern Warfare 2 version the terminal map gives a vivid experience which also includes the zombie stage which was a rage of the 90’s. In the play station VR system, proud owners get the infinite warfare Jackal Assault VR experience as a much touted freebie. One does not need an additional Infinite Warfare copy to enjoy this game if they own a PS VR or PS4.

An upgraded and enhanced gaming console

Sony’s PS4 device is a remodel of the standard PS4 hardware, especially of the controller and console. According to Trusted Reviews, the functions of New Slim are similar to the other consoles available. However, this device is less power hungry, leaner and slimmer. Sony’s New Slim is a substantial upgrade of the previous offering. The icing on the cake should you buy this bundle now is that you get to enjoy the experience of playing the most popular first person shooting game, Call of Duty. According to reliable sources, purchasing now is a very sensible option because they would then enjoy the exciting games to be released during 2017.

This new gaming console will not only offer an enhanced gaming experience but will woo the players with the plethora of new games to be launched in the upcoming year. Moreover, the enhanced features of the PS4 bundle means that gamers around the world can enjoy uninterrupted gaming sessions with ease.