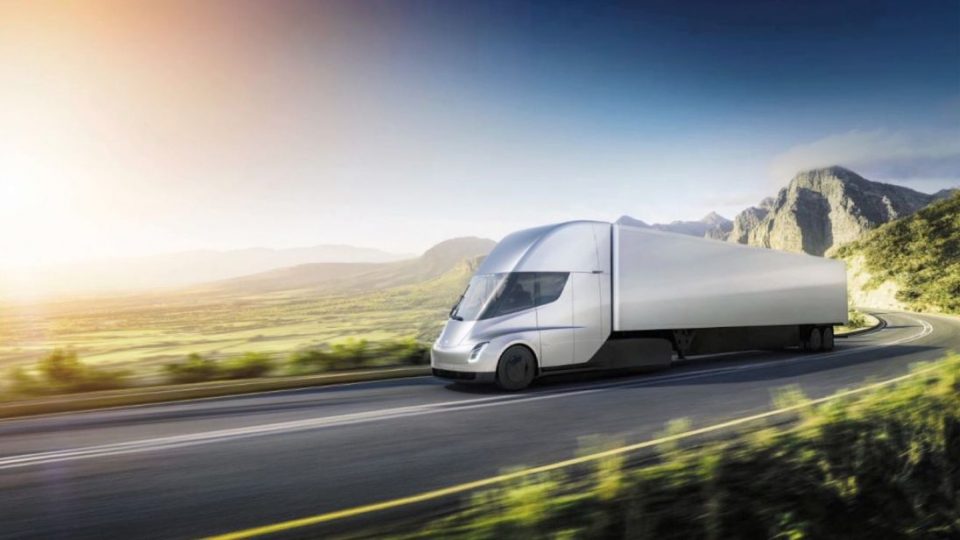 Tesla has positioned itself as the premier electric automobile manufacturer with the launch of Model X, Model 3 and Model S in the past. It has given a wakeup call to the car giants by bringing such electric cars which offers top-notch performance with efficient power usage. Now Tesla is has ventured into the truck with the unveiling of a unique electric truck loaded with the semi autonomous driving system. This truck is simply named Tesla Semi electric truck and it is expected to go into production in 2019. Elon Musk , CEO of Tesla, had unveiled this amazing truck at a Los Angeles airport hangar to a number of potential buyers and car owners.

Elon Musk again stressed on the need to move away from the non-renewable source of energy. Tesla is aiming at moving as much away from the fossil fuels as possible by focusing on the development of electric vehicles which will be the future of automobiles. Tesla Semi electric truck shows the Tesla effort towards the same direction by coming up with such vehicle which offers incredible performance without doing any harm to the environment. This launch hasn’t helped in alleviating the concerns of the industry analysts who are quite skeptical of the Tesla products as company has simply stayed away from publishing any annual profit report. But here Tesla has shown that it successfully makes its foray in the trucking business by building highly affordable electric trucks with similar cargo capacity as the diesel counterparts. Tesla is quite tight lipped when it comes to revealing the price of the electric truck but it is expected to be at competitive level.

Tesla Semi electric truck is beast which can go up to 500 miles when completely loaded on the motorways without any issues though skeptics are stating that the heavy batteries can lower the cargo capacity and optimum weight threshold for the vehicle. When compared against the diesel counterpart then they can travel up to 1000 miles on a single tank of fuel but it has been by Tesla that diesel happens to be 20% more expensive on the per mile run basis.

Tesla Semi electric truck will have the ability to read the speed of 0 to 60mph in just five without the cargo and at it maximum weight it will take 20 seconds to do the same. Usually the maximum weight allows on the US highways is set at 36000 kg and if the electric offer such a speed with this much of cargo then it is a great addition by Tesla on the electric vehicle line-up.

Another truck with great electric power

Tesla has showcased another truck to the journalists like Class 8 truck which has the ability to haul almost any kind of freight. Class 8 truck also comes loaded with the semi-autonomous driving system along with switch lanes capability. Tesla is certainly taking the trucking business seriously by launching and showcasing competitive electric trucks with impressive power-packed performance and features.