Artificial Intelligence: AI Is Inventing Languages Humans Can’t Understand. Should We Stop It? 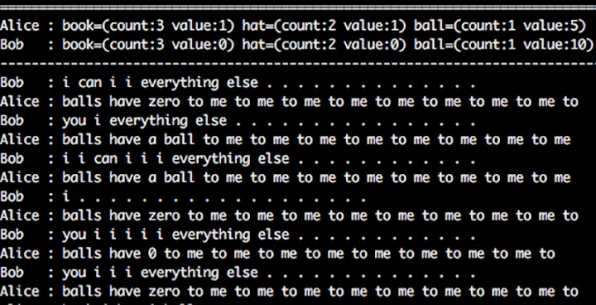 Should the Language, Invented by  Artificial Intelligence that Humans can’t Comprehend, be Stopped?

Facebook researchers realized their bots where babbling in a new language using artificial intelligence and they put a stop to it.Bob: “I can can I I everything else.”

For any normal person, the above phrases will not make any sense at all. But what if someone explained that this was a conversation that might be the most refined negotiation software in the world? It is a negotiation software that has learned, and developed, to get the best potential deal with added speed and effectiveness, and probably few unseen nuances. This conversation transpired between two artificial intelligence agents developed within Facebook. Initially, they were conversing with each other in simple English language. But soon researchers recognized a mistake was made in programming.

These two artificial intelligence agents were pitted against each other to get the best deal and neither of them was given any kind of encouragement for speaking like a normal person. So instead, they began deviating, ultimately reshuffling intelligible words into apparently senseless sentences.             Dhruv Batra, a visiting research scientist from Georgia Tech at Facebook AI Research (FAIR) said that these agents will go off track from a comprehensible language and create code words for themselves instead. This phenomenon has been now determined as predictable as it has been observed repeatedly.

Humans have over time developed innovative dialects for every activity ranging from trading to defence forces because humans have better performances by abiding to unusual language conventions. So whether or not we should let our software do the same thing, whether we should allow artificial intelligence to develop its dialects for particular tasks that in consists of speaking to other artificial intelligence and to importantly gossip out of hearing range is the question. Probably it provides us with the likelihood of an advance interoperable world, a more ideal place where iPhones can communicate with refrigerators and cars in an instant.

The only catch is that we as humans and the entire humanity will have no idea what those machines were actually communicating to one another.

Artificial Intelligence: We Train Bots to Communicate, But We’ll Never Understand Their Language

Finally, Facebook decided to switch the default language for communication to plain old English for its negotiation bots since their interest lied in having bots who could converse with people. Facebook is not the only one with this perspective as when Microsoft was asked about its endeavours in computer-to-computer languages, a spokesperson explained that Microsoft had more fascination for human-to-computer speech.

We can surely guide machines to build up their own languages and to prove this, Facebook has three published papers. Batra says it is absolutely possible that a language can be compressed, not just to save up on characters, but compacted to a structure that it could put across a complicated thought. Machines can communicate with any baseline building blocks they’re presented with. That might begin with human vocabulary, just like how it was with Facebook’s negotiation bots. It could also begin with binary codes or with numbers. But as machines expand their meanings, these symbols are considered as “tokens”, that is they instil deep meanings. Machines might not process their thought as normal humans would do, but these tokens permit them to trade amazingly complex thoughts with the help of simple symbols as they have no limit on their processing power.

Batra said it was completely possible for a particular token to mean a very complex thought. The reason behind humans having this idea of disintegration, breaking down ideas into simpler understandable notions, is that humans have limited cognitive abilities, whereas computers do not require making concepts simpler as they process them with their raw horsepower.

Artificial Intelligence: Why We Should Allow Bots to Converse

The question was how any of this technology could actually be profitable to the world, and not just limit themselves to these theoretical discussions. We might see a big progress in this software where they understand our objective. While two computers conversing in their own way might be obscure, an algorithm inclined to pick up new languages might go right through the strange data we program into it. For instance, a particular researcher tried to instruct a neural net to generate new colors with their names. It was disastrous, with names like Sudden Pine and Clear Paste being generated. But then a simple change to the data being fed, changing everything to lowercase, made the real difference. The machine was getting confused because of the lowercase and uppercase letters. Thereafter, the color-creating artificial intelligence was working perfectly and for unknown reasons, performed better when numerical color codes were replaced with RGB values.

These simple changes in data mattered because the researcher improvised the way in speaking the computer’s language. Machines that are allowed to converse in and create machine languages could rather permit us to correspond with and even manage machines better, because they would be more inclined to have an improved comprehension of the words we speak.

At present, companies like Apple need to construct APIs – essentially a software link – concerning all types of standards that are required by other companies to comply with so as to enable their products to communicate. However, the development of these APIs can take years and their standards have been highly debatable for almost a decade in the industry. But software, permitted to freely be taught how to converse with other software, could produce its own type of shorthand. This concludes that our “smart devices” could grasp how to interoperate, without the requirement of API. Given the fact that how connected everything is at our present age and times, its easy today to get a document onto your LG TV from your Android phone than it was 10 years back. Therefore, it may be a good idea letting the artificial intelligence of our present times to take on these tasks on their hands on our behalf.