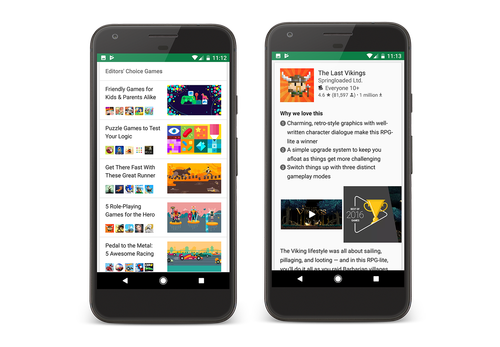 Android Excellence: Selected by the Play Store Editors Choice Update – These are the 32 best Android apps

The Play Store now has a good 2 million apps, and it is not so easy to pick the best out of this wealth. In order to help both users and app developers to help each other, Google has now introduced the new Android Excellence category, called Editors Choice Update which includes the best apps and games chosen by an editorial team. This list should be updated quarterly.

In recent years, there has been the “Editors Choice” area in the Play Store, where new and very good and little-respected apps were presented, which were previously selected by the editor of the store. This area was only recently abolished and has now been given a successor. The new Editors Choice section consists of a separate category, which is now to be updated quarterly. Until then, the apps can look forward to much attention.

The editor of the Play Store was the first 32 apps – including exactly 16 games – to be selected in this category, and made a quite interesting selection. This includes both well-known apps that would hardly need such a list, such as Pocket or Runtastic, as well as newcomers or apps with very good ratings but only a few downloads. For the games looks very similar.

On the whole, the apps should be able to master the best practices tips suggested by Google and be very well-designed both technically and from the concept and the implementation. According to Google, apps that can not be missing on any smartphone – at least if one belongs to the respective target group. Because not all apps are available in every country or device, the Excellence category may not have 32 entries for each user. For me, there are only 27 apps and games listed there.

These are the 16 best Android apps in Editors Choice

These are the 16 best Android games in Editors Choice

Just a few weeks ago, the Google Play Awards were also awarded, in which apps were awarded in 12 categories. Some of these are now in the Excellence category, but overall, the two awards are unrelated, and indeed the new category is likely to bring app developers more than the awards, which are even partial to the use of Technical gadgets.

If Google advertises the category in the Play Store on the home page, which is likely to be the case soon, an entry there can surely bring a lot of newcomers and new users and then help to make a breakthrough.