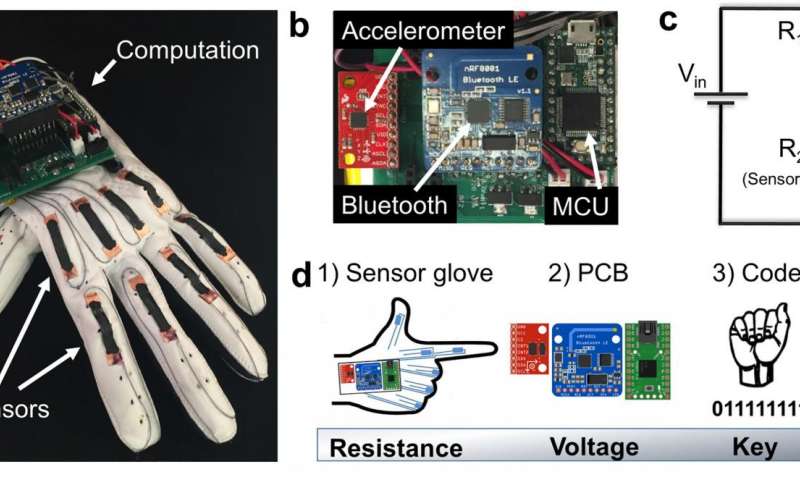 If you do not speak the sign language, deaf people have a problem. A glove full of technology will help them. In glove that can speak? Sounds like a strange gadget. But it could make life much easier for the deaf. Because they speak with their hands – but only a few are understood. Not everyone speaks the sign language. Students from the Master’s degree course in Interaction Design at Magdeburg-Stendal University have therefore developed a glove that makes language visible.

It does not look particularly fashionable. Cables are crisscrossed over the red fabric to form a metal plate just behind the wrist. Depending on the curvature of the finger, sensors transmit letters to a screen. Deaf people can thus make people understandable who are not able to speak. The Glove model is still quite crude, says the responsible professor Steffi Husslein. “But also in the case of sports manufacturers, prototypes are built like this.”

Wearable technology (as a piece of wearable technology) – this is the name of the combination of textiles and electronics, which has long since ceased to include fitness bracelets. Clothes also become cleverer: Jackets cool in heat, shoes indicate the way to the destination by vibration. Smart fashion in many countries is still a niche market.

But Husslein is convinced that she will soon become interesting for Otto Normal consumer. “The more intelligent the materials become, the more likely people are willing to spend money on it.”

The course of studies Interaction Design therefore maintains close contact with the industry. Here, industrial designers are working with electrical engineers and machine builders on intelligent control systems for car manufacturers. “Our students should develop sensible things that do not just flash,” says Husslein.

Currently, 26 young people are enrolled in the Master’s program. For the start of the new semester in fall, up to 16 new places will be awarded by a suitability test, explains a university speaker.

However, not every electronics-equipped garment is automatically smart, says Design professor. Actually smart is fashion only when it interacts. As an example, she calls clothing that detects heat and cools the wearer. “The clothing becomes the second skin.”

However, consumers are warned about the potential abuse of personal information such as heart rate or calorie consumption. For example, an insurance group was concerned with the idea for headlines to reward fitness enthusiasts with a bonus model. If you are willing to disclose your fitness data and dietary habits, you can hope for a discount.

“Do I really want to let technology tell me how many steps I still have to run today?”, Asks Lars Gatschke from the Federal Association of Consumer Centers. Corporations would be able to adapt themselves to these requirements by means of such models.

The Magdeburg Professor Husslein admits that intelligent clothing carries the risk of total surveillance. It does not carry any electronics on the skin. A conscious decision, as she says. Tracking sensors are installed in their handbags only. “So I must know where I left it.”